Arrival/Departure is a digital video installation by Spanish artist Tom Carr that projects silhouettes of urbanites ascending and descending through the pinhole frame on an escalator. The project is a major collaboration between Art Plural Gallery and Streaming Museum In the past, Arrival/Departure has been broadcasted on 23 BBC screens across the UK, in Melbourne's Federation Square,  on COCOR Mediachannel in Bucharest,  at the Sikka Art Fair in Dubai, at The Concourse in Sydney, in Kvinesdal (Norway) and many other of Streaming Museum’s many large-format public screens located all over the world.

The a simple vignette presents the instantly recognisable urban scenario of people riding escalators. Tom Carr is known to reference staircases in his earlier sculptures, alluding to human presence through the affected characteristics of the stairs. However, Arrival · Departure does quite the opposite, presenting people explicitly but in an ambiguous environment. Reduced to mere silhouettes, these anonymous people are dematerialized, losing and regaining their shape as they ascend and descend the escalators, crossing paths in the two-dimensional space where there is no distinction between foreground and background. They travel along the same path within the same space, and yet there is no communication. Depicting both the individual and the archetype, the silhouettes portray the universal condition of people in transit.

Tom Carr describes a hive of activity, where people constantly land and take off from hubs. Referencing airports and the capacity for human beings to be transported quasi-instantaneously from one place to another, the artist tells us about the loss of markers, about how people are flying over their life as if in planes. 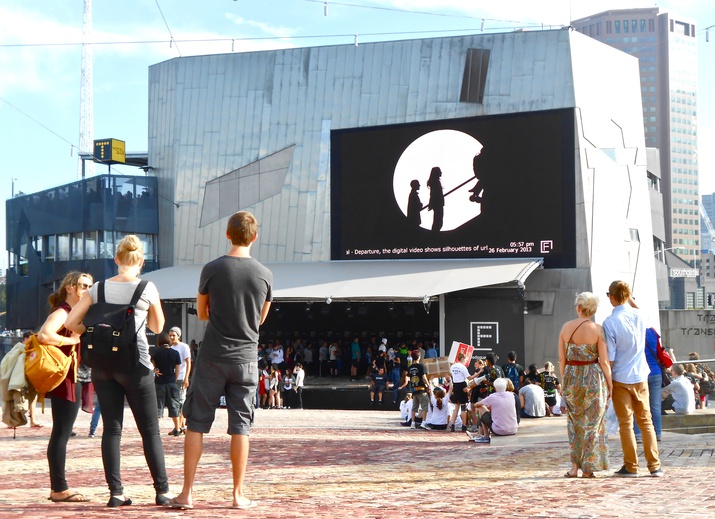